“They alone live who live for others, the rest are more dead than alive”

There are very few people who selflessly work for the betterment of the Society as a whole. They just step aside to undertake and accomplish the gigantic and mountainous task of changing the society all by themselves; neglecting all the thoughts and notions to gain fame or money. Hon’ble Shri Pratap Bhaiya was one such a great man. The journey of our lives covered by our Grandson-Grandfather relationship is too long to admit of adequate coverage through the present opportunity. I would, therefore, restrict myself to some remarkable memories I have from the time we spent together. 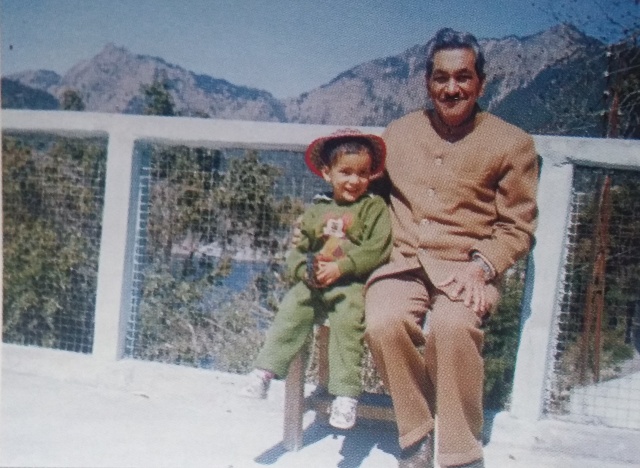 Those who knew him or participated in the meetings and forums he organized know what a punctual man he was. I remember he used to tell me, “समय के इतने पाबंद रहो कि  लोग तुम्हे रास्ते में देखकर अपने हाथ की घड़ी का समय मिलाएं “. I don’t remember sleeping after or waking up before him. Whenever I saw him, he was up and working. No matter whether it was cold, raining or very sunny outside, He’d always be on schedule. There are instances when he’d start a program without the chief-guests and those when he asked other people to preside on the chief-guests’ seats as the designated person couldn’t reach the venue on time.

When he was the leader of the student union of Lucknow University, He got in touch with Acharya Narendra Dev; then Vice-Chancellor of Lucknow University, and was deeply influenced by his ideology. The name “Pratap Bhai” was first given by Acharya Narendra Dev and he has been known as “Pratap Bhaiya” ever since. At the age of 25, he became a minister in the Charan Singh-led government in 1967 and was even referred to as modern day’s Malviya for setting up more than 100 schools including Bhartiya Shaheed Sainik School in Nainital (established in 1964 after Indo-China War of 1962) and Tharu Inter College in Khatima. He is also remembered for the establishment of a nurses training center at Nainital, government hospitals in Okhalkanda and Haldwani, and also as the founder Member of the renowned NGO ‘Aarohi’.

All this was before I set foot in this world and so I couldn’t witness these changes happening. However, one such contribution I did observe was his commitment to erase Casteism in the society. He had given up using his own surname ‘Pratap Singh Bora’ and instead used ‘Pratap Bhaiya’ to promote equality of all Castes. This ideology was implemented in various Schools he started and the students’ surname was not used in any of the school registers. However, with the recent orders from the Education Department, this practice had to be given up as Caste now plays a major role in every field of the society: Jobs, politics and even for examination purposes.

Being a Socialist, he always used to promote, “काम का बँटवारा , इन्सान बराबर”. What he meant by this was in every Organization, even a worker commands the same respect as the person occupying the highest position. In a Society where there’s discrimination on the basis of how much a person earns, he always justified equal treatment for all. His colleagues would tell me that most of the poor clients would come to him as they had faith on him. One such instance was, as I recall, a poor client of his was heading back home after having won the case. Having paid the fees, his pockets were empty and he didn’t even have enough money to take a ride. Pratap Bhaiya Ji sensed this and putting some money in his hands secretly said, “घर जाते हुए बच्चो के लिए मेरी तरफ से जलेबी ले लेना”. Whether his Client was rich or poor, he’d offer them tea and biscuit and asked them to sit beside him. Whenever someone visited him asking for a job, he never denied. He’d ask them to write letters for him and do other works for his seminars and Forums, in return of which he’d pay them from his own pockets. In doing so, he believed was stopping a brilliant youngster from falling into the dark side of the world. Many of the Boys working with him qualified for government jobs later on.

He knew that the rural Villages would soon become vacant if proper attention was not given to the villagers’ needs and so he started many schools for giving proper education to the youngsters. He’d organize workshops in the backward areas so that the villagers could start some small-scale industries on their own. “Acharya Narendra Dev Industrial Training Institute, Nainital” was one such initiative. He would try to provide free education for the economically weak so that they won’t have to face unemployment in the future. Even today, when everyone is busy printing money from their commercial educational institutes, there’s a very nominal fee in the schools he started.

His love for the Country was profound. Although he had never been in the army, he’d wear an army dress when attending student parades; the same as the uniform of Sainik School, Nainital. He taught us not to use the words ‘Hello’ and ‘Goodbye’, he’d teach us to say ‘Jai Hind’ instead. Every seminar, rally or parade he went to, he’d always greet the audience with ‘Jai Hind’. All the programs he’d preside would always end with the National Anthem. The students would also greet him with a salute and loud ‘Jai Hind’, whenever and wherever they saw him.  He was no less than an army soldier when it came to discipline and this reflected in his everyday lifestyle.

There may come a time when there is a politician in every house but even then no person will ever match the grandeur and the skills that Hon’ble Shri Pratap Bhaiya possessed. A person who worked for the awakening of the society all lifelong is now lying calm and silent in the afterlife. Only if we had realized his importance and understood the various aspects of his personality back then, our country and the society would’ve benefited far beyond what we see today. It’s been 8 Years since he left us, but his inspiration and legacy still remain.

11 thoughts on “Pratap Bhaiya: A Man Before His Time”